May was a noisy month.

Nature was noisy.   We had wind, lots and lots of wind.   We also had rain, thunder, and birds getting into some serious competitive oratorio.

In March there was a shooting incident at the monthly Smithfield Horse Market, and helicopters have been hovering around here since then.

In May the helicopters escalated their hoverage.

Now, I strictly avoid all mass media for the simple reason that The News is  waaaayyyy  too depressing.   If something important happens and I don’t stumble across it myself, somebody else will usually mention it to me.

On this occasion the traffic noise, sirens, roadblocks and helicopter escalation all reminded me over and over and over again that Queen Elizabeth II and Barack Obama were both visiting.   And these visiting dignitaries supplemented our local noise by bringing their own noisy security arrangements.

So all of May was pretty noisy in general, but from Sunday 15 to Tuesday 24 May, what with all the security, traffic diversions, helicopter hoverage and sirens everywhere, Dublin was not only especially bonus extra noisy, but it was also a fucking pain in the hole to get around.

If there were such a thing as a sound museum, May 2011 in Dublin and especially the week of 17 – 24 May would definitely qualify as an epic noise exhibit.

Here is some representative audio I recorded  as evidence to support my bitching about the noise  to remember these moments for all posterity.

At the beginning of March this year there was a shooting and other violence at the nearby monthly Smithfield Horse Market.   I often go there to record equine sounds, but I happened to miss this one, thankfully.   A year ago on 7 March I was there on an equine foley gathering expedition, and kvetch filmed me.

So that’s the kind of noise we get from Smithfield Horse Market once a month.

The helicopters hanging out after this year’s March fair were kicking up a hell of a racket, and during the past two months I got a lot of helicopter foley.   When it escalated in May I got lots more.

Nonstop noisy shit day  and  night really gets to me after awhile.   I don’t know about you but I find those kind of noise levels really demoralising.

Here’s a representative sample including sirens, which I recorded at 15:14 on 17 May.   This audio clip is 2:20 long, and there’s bucketloads more where that came from, let me tell you.

And for your further viewing entertainment, on that night there was a full moon. 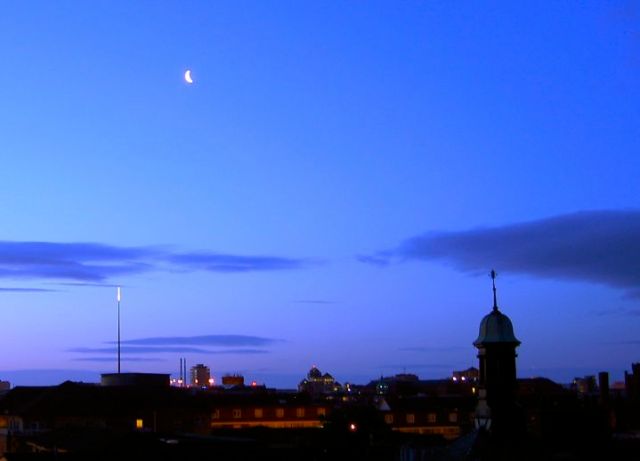 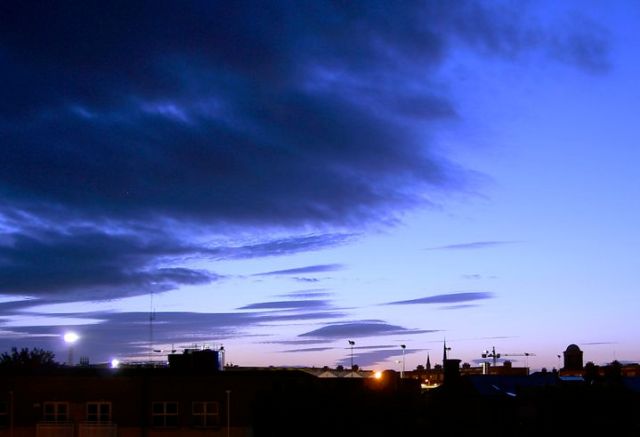 Early on the Monday morning of 09 May, the wind had died down, the helicopters and sirens were taking a break, and both road and air traffic were exceptionally calm. 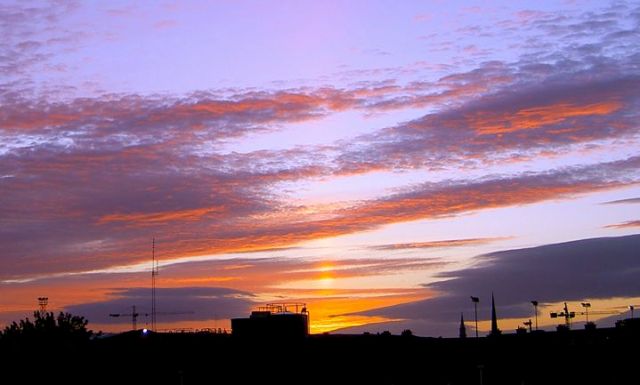 Well, it  would  have been easing off  –  except there were these birds, you see.

I guess they were excited to be able to sing without the usual competition from the National Helicopter Choir.

Here is some fairly spectacular audio I captured at 05:03 on 09 May of blackbirds yammering their heads off.   This audio clip is 01:13 long.

May also had lots of wind, rain and some thunder.   Here’s some audio I captured of it on the afternoon of Friday 13 May.   I had the record levels quite low because the thunder peaks easily, but even so you can still hear the ever prevalent helicopter whining away in the distance.   This audio clip is 01:03 long.

When I record stuff my cat often has a tendency to want to jump right in and get some extemporised vocals included in my recordings.   She has a talent for inevitably and unerringly jumping in during the very best-sounding bits, especially when I’m trying to get something really specific and random like a weather event, such as thunder or rain or something.

So I have to exclude her from whichever room I’m recording in.   She always has plenty of room elsewhere with access to everything she needs, but …

Well, you know cats.   If a door is closed, that represents a major,  major  tragedy which must be addressed  at once.   Obviously.

So here are some examples of kitty audio contributions I recorded this month.   Note how she has jumped in during the most interesting-sounding moments.

On 13 May whilst I was recording the thunder, kitty chimed in during what would have been an exceptionally good rumble.   This audio clip is 00:16 long.

On 07 May I was trying to record the sound of rain drumming on the roof, and during the very very best rainy part, who comes in to bitch?   And what weather event faded out just as I evacuated her to the other room?   I’ll leave the answers as an exercise for the listener.   This audio clip is 00:55 long. 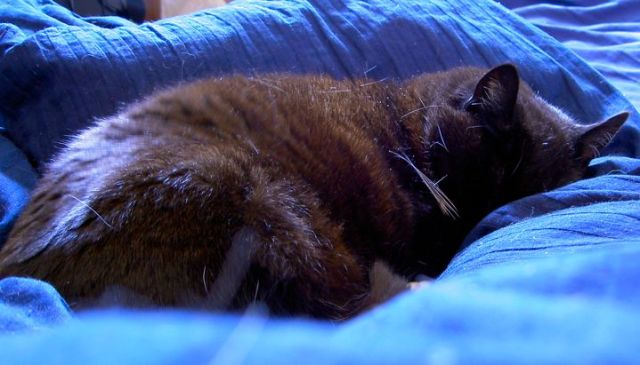 Queen of the Duvet reclaiming her throne.

On the evening of 23 May after the kitty was cruelly,  cruelly  I tell you, excluded from the bedroom for half an hour  (oh NOEZ!!!),  I specially recorded her re-entry bitchfest.   Here’s a representative 23 seconds of kitty filing her usual post-exclusion complaints.   This audio clip is 00:23 long. 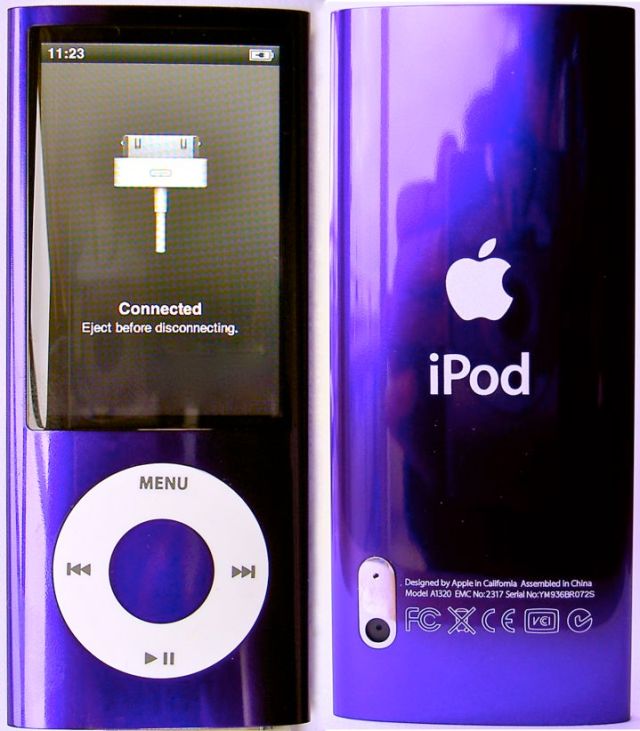 And finally, whilst I’m about this media sharefest, on the afternoon of 18 May I shot a wee film with my iPod Nano whilst I was recording some trains in Belfast.

Take special note of the trees and their vigorous interpretive wind dance.   That angsty limb flingage is representative of how windy it’s been all month.

The audio quality in these conditions is is a testament to the effectiveness of my homemade magic foam windscreen, it shielded the mic from wind noise excellently!

The Nano’s video-mic turned out to be terribly susceptible to wind noise, and the audio from it was unusable.   This film is 03:38 long.

ps:   The helicopters are still whining around here.

This is the stuff what I used to capture the audio and video with.

AT-899 with magic foam windscreen clip mounted on gear bag 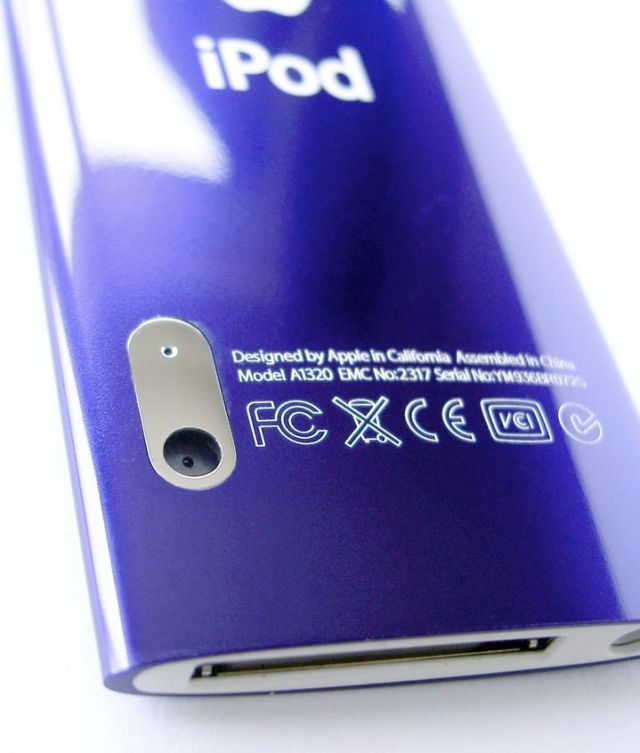 2 Responses to May Noisiness

Spill yo oh-PIN-yunz after the tone ... Cancel reply